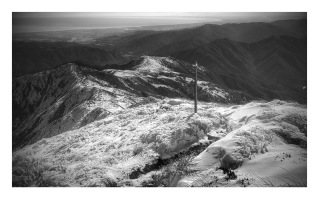 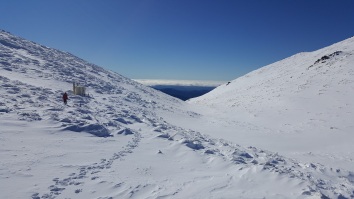 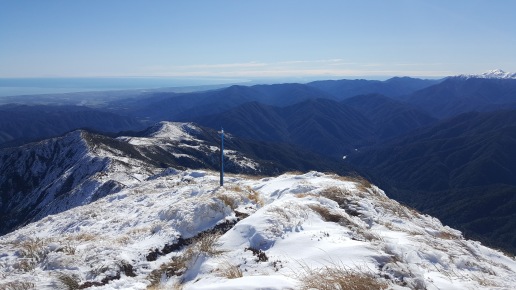 In the last week of July a good cold snap hit the country bringing snow to the Wellington hills. On the Sunday we ran in the Mukamuka Munter in the snow.

Later in the week the weather cleared for a shot at doing a snowy Southern Crossing. Marta and I set out from Otaki, Tim and Ash from Waiohine.

We hit the snow well before Field, once we got above the bushline the snow was dry, light and upto knee deep in spots. We followed footprints to Kime which made it easier. We were expecting to get an update from Tim once he hit the snow at Cone.

We meet the couple who had provided the footprints at Kime. They had stayed the night and were heading back down.

No footprints to follow from here, just lots and lots of the white stuff. Soon we were breaking through the crust up to our knees and later on to our thighs. It was tough going heading up to Hector, my gloves were wet and hands were going cold, my gators broke and I was leaving a trail of blood from my knees. Fun times!

Tim and Ash had turned around due to waist deep snow. I used my spare socks as mittens and put on my overtrousers to get back to Kime. The old ski field was the perfect slope for a belly slide down the hill.

I learnt some Italian swear words when the ice drifts crashed off the roof of Kime with a hell of a noise. There were a handful of people enjoying the snow and sun as we cruised back to the forks. The adventure was perfectly finished with a quick dip in the river, Tim’s chippies and cold beer!