When you look at the map of the North Island there is a huge wilderness area East of the desert road all the way out to Hawkes Bay. 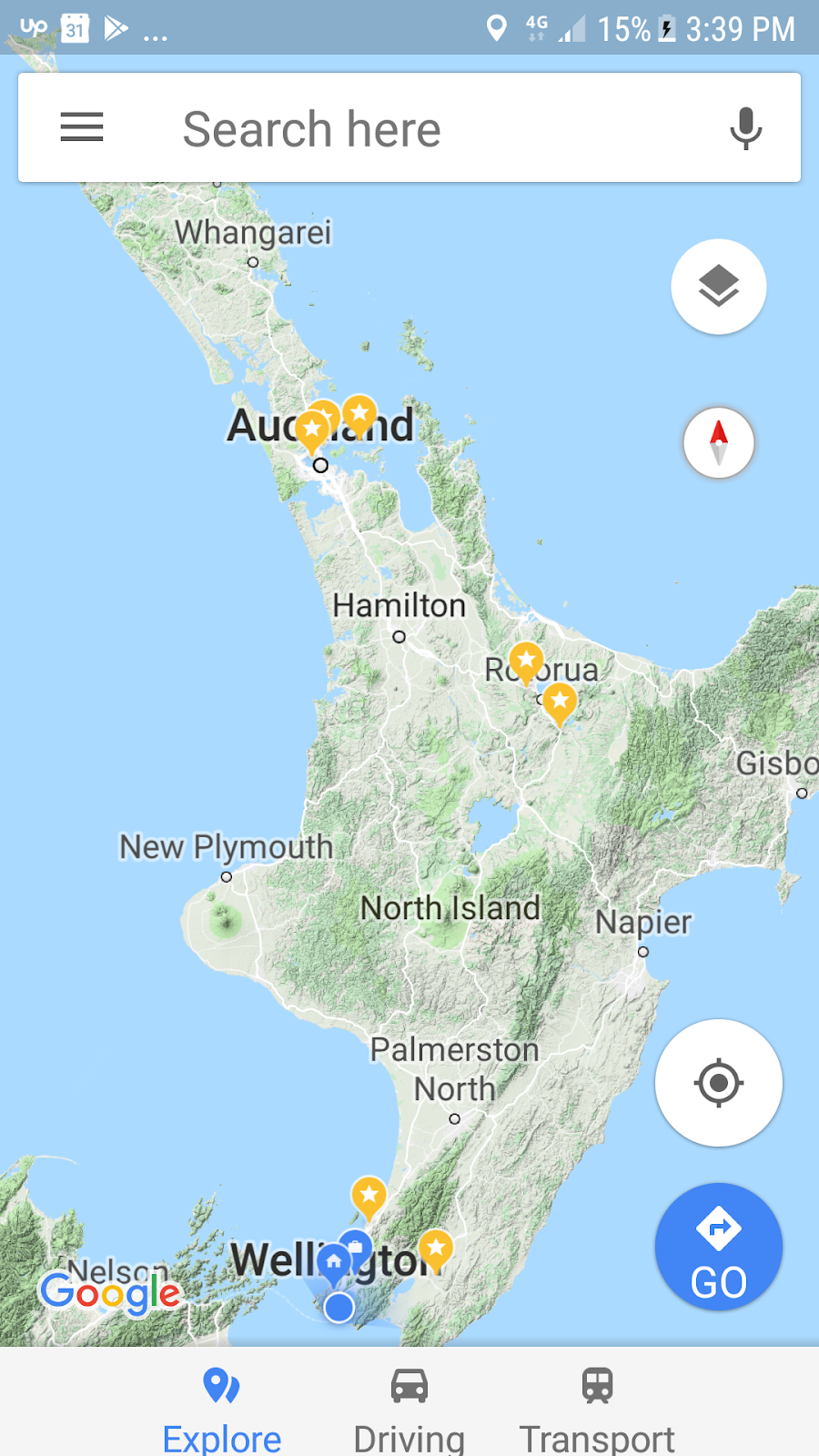 A few years ago I tramped a magic loop on the edge of this area up the Waipakihi river and back over Umukarikari.

The Big Sunday Run crew had done a few missions in the area and there was chatter about a trip in February. We circled a weekend in the calendar and started to plan.

I found a route in my Classic Tramping book, a gift from my father in law that inspired our Tararua SMR trip two years ago.

The classic Kaimanawa Kaweka traverse has a big block of private land in the middle of it. Thanks to the generosity of the land owners there are permits available when the hunting blocks are not being used. https://wilderlife.nz/2017/04/kaimanawa-ranges-access/

We found an account of a tramping group that had done the trip and started to map out our plan.

My father inlaw connected me with one of his tramping friends in Turangi to find out about possible transport options. Kevin was incredibly helpful, not only did he offer to provide transport, his son Robert had done the trip a few months earlier and was able to help with the trip planning.

After getting all the info we could, we made a plan.

We would set off from Kaimanawa Rd on Friday afternoon and if the weather was good we would bivi next to the Rangitikei river est time 7 hours. Saturday we would cover the rest of the Kaimanawas including the the island range, the high point Makorako, the river valleys of the Mangamingi and Ngaruroro and spend the night at one of the huts in the Kawekas, hopefully Te Puke to keep Sunday as manageable as possible est time 15 hours. Sunday out to the road end at Makahu Saddle est time 9 hours.

We had a group of 4 adventurers who were keen and available that weekend. Marta was keen for some more god zone training, Al is a true explorer and loves new country, Anthony was very excited about the route, one of his relatives had trekked it when they moved to a Hawkes Bay school back in the olden days. I was stoked to be doing a big adventure in new country.

The weather thumbnails were looking promising as we did our final packing, cyclone gita was going to hold off until we finished. This was my first two night fast pack trip and getting our gear and food right was going to be helpful for a successful trip. 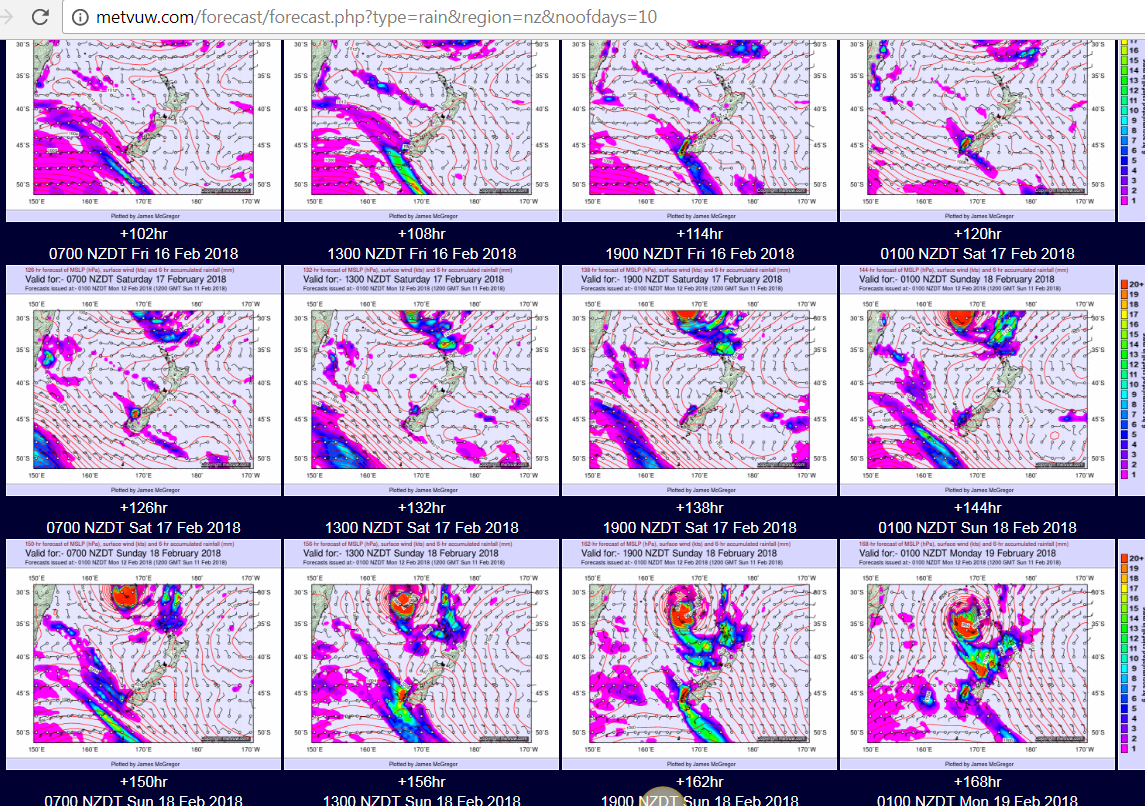 I found a freeze dried back country adventure food pack and added my normal muesli bars, chocolate bars, 10 Kransky sausages and lots of tailwind for my drink bottles.

We meet Kevin at the Kaimanawa Rd turn off and set off up the Umukarikari range. There were two school vans at the car park.

It was a beautiful afternoon to be on the volcanic alpine tops of the umukarikari range. We had views for miles. I caught my first view of the steep rocky cone shaped Makorako, the high point in the Kaimanawas that would dominate the horizon for the whole trip. The school group were at Waipakihi hut, they had traveled from the far north that morning and were enjoying the last of the sun from the deck.

The climb to junction top 1600m was one of the most awe inspiring outdoor experiences I have had. The sun was setting behind Ruapehu as we climbed the lovely alpine ridge, the vastness of the area was starting to make its presence felt. Standing on the top we looked down into the steep Rangitikei valley, it was dark and ominous, the lights of Taupo were our last glimpse of civilisation for two days. 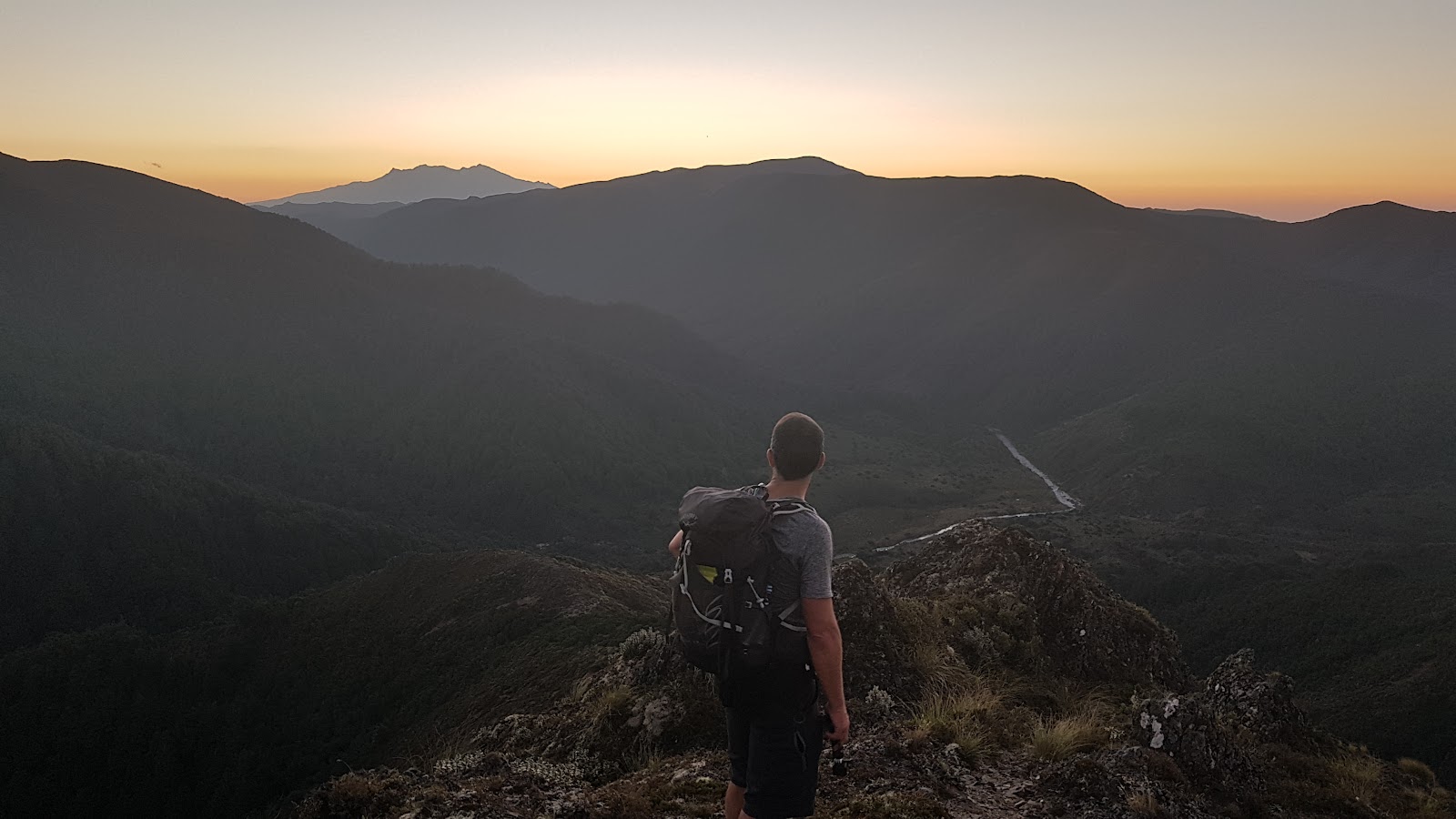 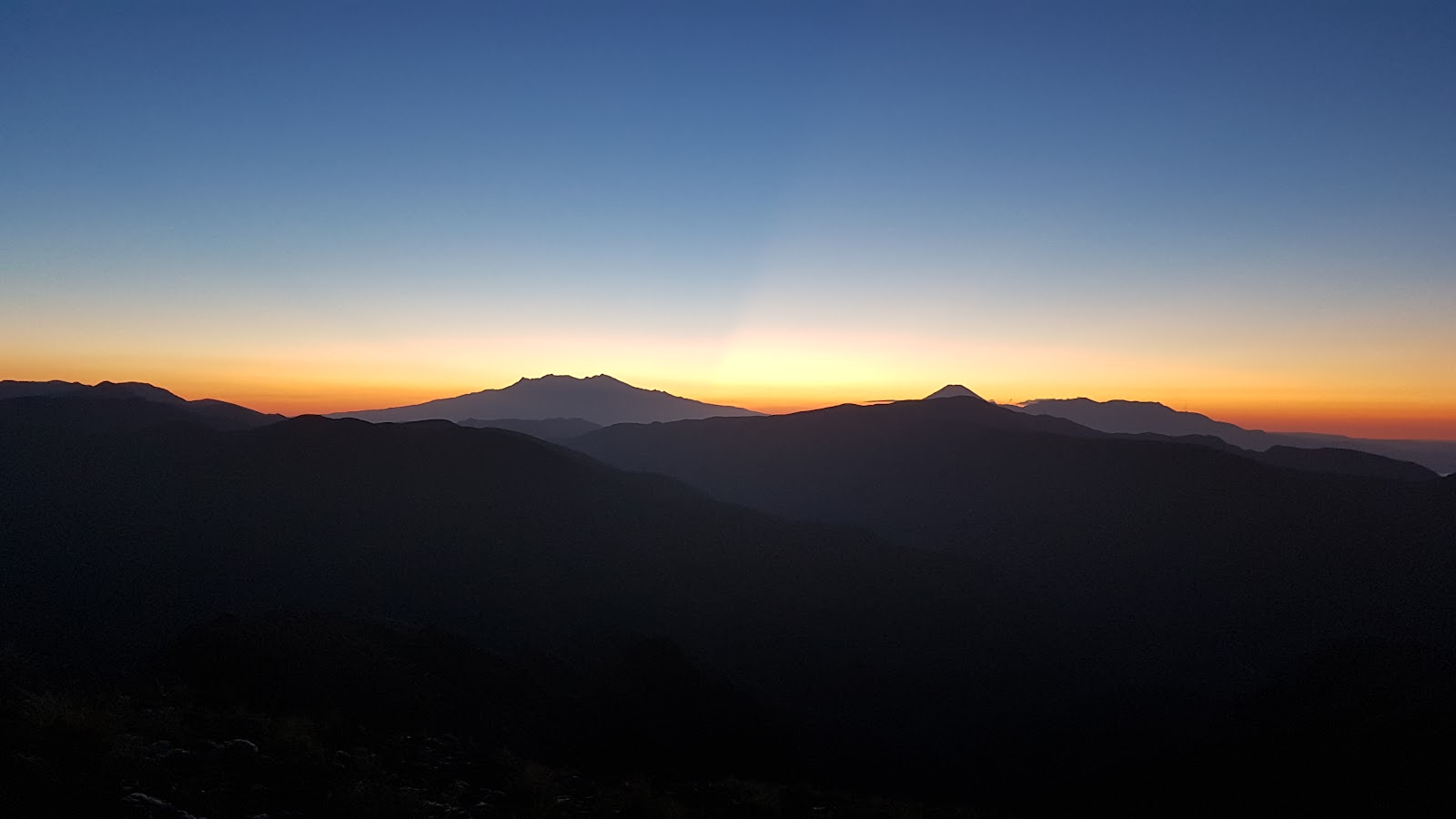 This is the start of the private land we had a permit for and the end of the marked track. We had a gpx provided by Robert but he hadn’t followed this route due to hunting activities that meant his permit required he cross the Rangitikei further south. We dropped down into the valley under headlamps trying to follow the gpx path. It was rough and lots of scrub meant we were bush bashing quickly. Soon we were stuck in a creek and bluffed out by a 10m waterfall. We got on our hands and knees and crawled through the scrub until we finally got back onto the spur which meant we could stand up. Marta announced rule no1 for the trip, if we have to crawl we turn back and find a better path.

Bush bashing in the dark. We continued to bush bash down to the Rangitikei it was hard slow progress and finally we got to the river. We could see a little island up the river that looked promising for bivi spots. We found a nice spot to sleep and boiled some water for a late dinner. Sitting there in the middle of nowhere after a tough few hours brought on the magnitude of the adventure we were on. Halfway into tomorrow (Saturday) we would be about as far away from civilisation as you can get in the North Island.

We didn’t get much sleep, it was cold and we were travelling light. My experiment of not bringing a sleeping bag was a failure. My Bivi bag was fine for a hut but not for being outside at 1,000m. I setup my camera in the night to capture the stars, when I got the camera from the river bank it had been moved by some animal and was sitting upright no longer facing the stars. I hope I got the shot!

We set off with the fear of more bush bashing, the river was beautiful, so clear and blue ducks playing in a magic looking swimming hole. No time for swimming yet. We wandered down the river hoping to pick up the sign of a route where the gpx left the river. All of a sudden Al appeared at the creek we had come down last night. Al had been delayed leaving town and was planning to sleep on the tops and catch us at some point this morning. It was great to see him arrive safe. We found a cairn and to our surprise a good route out of the valley on to the island range. Today we would cover the moist alpine island range, the range with Makorako the high point in the Kaimanawas that dominates the horizon, the sub alpine scrub areas of Mangamaire, In the heart of the area we have the river valleys of the Mangamingi and Ngaruroro. We would finish the day entering the Kawekas in the beautiful beach forest with moss edged trails and tussock covered valleys.

Anthony spotted a red deer looking at us from the next ridge, the tops section were spectacular, easier climbing than our Tararuas and nice wide runnable ridges. We got caught in a rough patch of scrub heading down to the Mangamaire, I had to put my over trousers on to stop the leg pain from the sharp scrub. I had a nice dip in the river before we headed up the next hill. Anthony stepped on a wasps nest that lead to a furry of Italian swear words and some sprinting to get away. A few stings later we settled into our afternoon rhythm of crossing rivers. It was about this time I realised I had been wearing my tee shirt back to front and inside out, the brain was clearly working slowly this morning!. I got to try one of my new smoothie packets, that was a real winner, note to self always pack those.

We reached the lovely Tussock hut at 6pm and pushed onto Harkness, Robert had warned me about how slow this section was, river cross after river crossing in thigh to waist deep water on slippery rocks was tough work. It was great to find Harkness was nearly as nice as Tussock hut. We ate and crashed it had been a big day.

It looked like we had 24kms to cover on the last day and were getting picked up at 3pm. It ended up being 31km lucky we left at 7am, thanks Al. My timing estimates are often optimistic which can be problematic.

The tops sections in the western Kawekas are a nice mix of greywacke and alpine scrub.

Finally the barren loose rock of the Kawekas range that looks like another planet. In between are the beautiful beach forest trails lined with pretty moss verges.

The only people we saw from Waipakihi hut to the end were a Dad and his sons who had helicoptered in to do some hunting. We ran lots of the ridges and had our breath taken away by the views.

There is a special feeling that comes from an adventure like this, a mountain adrenaline that makes you feel fantastic.

Huge thanks to Kevin and Robert for their help and to my fellow adventurers.

One response to “Kaimanawa Kaweka traverse”